Here are some actual Dashboards grouped in pairs (one in three's) so you can show the differences. They are fully interactive. The main takeaway should be not which is the better tool or machine, but rather that you cannot predict what combination is better or best without a tap-test.

There are 11 total sample Dashboards, 8 in a Haas VF2SS and 3 in an Okuma M560VE. The endmill stick-outs were the same in the Haas and the Okuma. The toolholders were the same 1.75" projection, however the Okuma was BIGPlus dual contact and the Haas had a standard gap. We left the chip load at 0.004 IPT on all tools for comparison purposes.

​Identical 1/2" 5 flute long endmills in P1, a typical trochoidal milling application. Set to full 1.25" depth of cut and 10% radial. The Haas will be stable around 9200 RPM. The Okuma despite having dual contact (BIGPlus) cannot improve on the Haas performance.

​Here are two Dashboards for the same 5/8" 4 Flute Uncoated Carbide Endmill in the same Toolholder, both in a Haas VF2-SS. One is set for N1 (aluminum ) workpiece material and the other for P1 (steel). Set both to 0.625" axial depth of cut and 0.125" (20%) radial width of cut and note the differences in stable speeds. Now lower the axial depth on the P1 Dashboards and notice how it reveals the same stable pocket at about 7700 RPM as the N1. This flexibility and frequency of the tool does not change, but the amplitude of the deflection does based on the material. 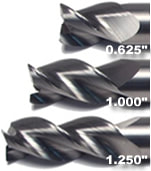 Here are three Dashboards in the same Haas model with the same toolholder and the same 1/2" 3 flute endmill design, but in three lengths. Set all three to the same 0.500" axial depth of cut and 40% radial. The short endmill can cut stable at 11,990 RPM, the medium only 5700 RPM and the long only 420 RPM.  The MRR ranges from 0.51 to 6.87 to 14.44 cubes.
​
Note that endmill manufacturers do not change their recommendations  based on the tool length, but maybe they should.
RETURN TO MODULE